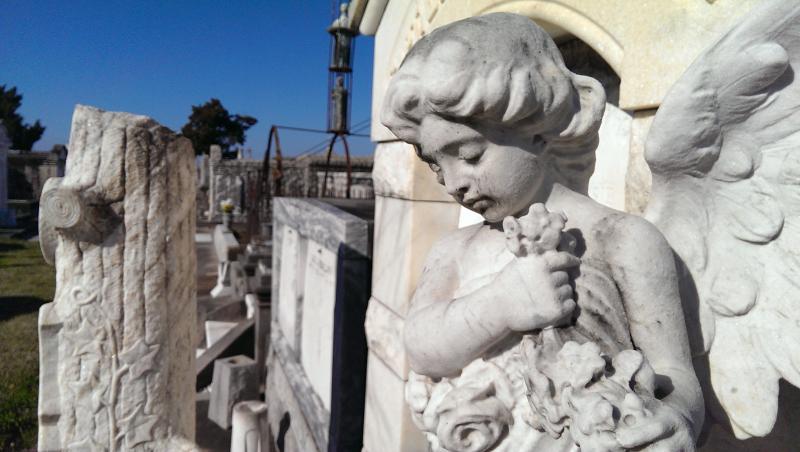 Things that go “Bump in the Night” are often things we’d all like to avoid. But in New Orleans, Ghosts and Goblins aren’t only residents, but they’re also Big attractions. Well maybe not the Ghosts themselves, but definitely the places they roam especially in the chilling cemeteries of New Orleans.

City of Many Names…

New Orleans is known by many names: The Big Easy, The Crescent City, The City that Care Forgot, but the most hauntingly memorable name is “The City of the Dead.” You might be wondering how this creepy nickname came about…well as usual in New Orleans, Truth is Stranger than Fiction. New Orleans is actually built on top of swamps and is below sea level. So if people were traditionally buried underground, they would actually float and rise to the top…much like the undead Zombies! Although Zombie Lovers might relish the idea of the undead rising, I don’t think “Floating Dead People” would make a welcoming Travel Brochure. Because of this limitation, or maybe it was a blessing, the crypts, mausoleums, and tombs were all built above ground. As a result, you’ll see countless rows of concrete, crosses, and angels much like you would when looking at buildings in a city hence the name City of the Dead.

Designed for the Dead

Since tombs had to be above ground, the Spanish burial method of using vaults or “ovens” instead of coffins were used to store the deceased. This method was both economical and efficient, plus no floating dead people! New Orleans has a current total of 42 cemeteries littered throughout the city with the newest being the expansive army of tombs on Canal Street and Metairie Road. Most historic and famous are the three Saint Louis Cemeteries  in the French Quarter. Saint Louis Cemetery #1 is undoubtedly the most well-known and infamous for one reason…the Voodoo Queen or more specifically, Marie Laveau the Voodoo Queen. Her life was filled with Romantic Mysticism and people still leave offerings and perform rituals on her grave marked with a X. However, there’s still some dispute over whether or not she’s actually buried in the tomb or if it’s her daughter Marie Laveau II. There’s also Lafayette Cemetery No. 1 in the Garden District on Washington Ave. being one of the oldest in the city of New Orleans and the sight of many Movie productions.

Visions of Angels and Demons

Explore any of these spooky crypts and you’ll see similar characteristics. Majestic mausoleums, dilapidated headstones, twisted iron fences, ornate crosses, and Angels. Yes Angels, the watch guards of the dead, but look closely at the deep, weathered eyes and you might catch a glimpse of a Demon waiting to pull you into the darkest depths of purgatory…Boo! All of these sights are wrapped in a small city of winding roads and grey structures complete with street names on every corner. In the larger cemeteries, like the ones at the end of Canal Street, you could walk aimlessly and marvel at the literally thousands of rows of tombs as far as the eyes can see. It’s a sight that’s both wondrous and morbid. And if it seems like you’re lost in a distant worldly place other than New Orleans, well that’s because you are now in the City of the Dead. Get Location