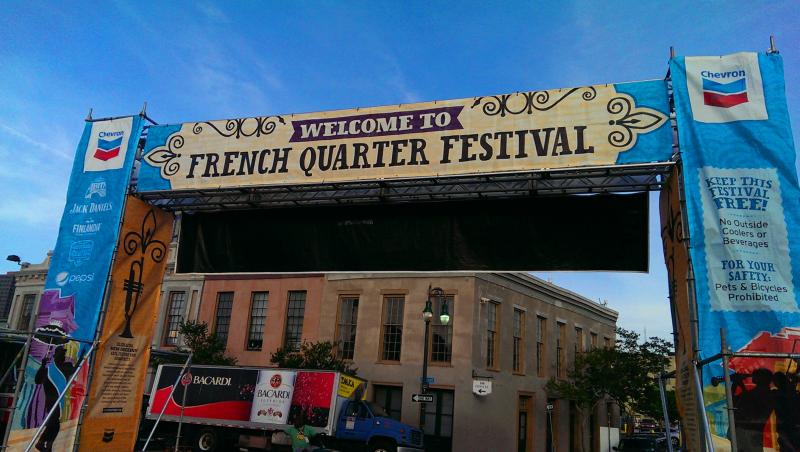 Weather…it’s a force of nature. Love it or Hate it, it’s an uncontrollable element that can change the mood of any activity. And the most powerful element in New Orleans is Rain. For anyone who remembers the movie Singing in the Rain, it was a festive mood of song and dance in the presence of delightful rain, but that’s not the case this year during French Quarter Fest. As discussed on my Food Fest post, spring brings us Festival Season, but it’s also the beginning of our rainy season. Among all the Fantastic Fun Festivals in New Orleans, the Biggest, Baddest, and my personal Favorite is French Quarter Fest. There is no Festival in New Orleans or Louisiana that is larger and more recognizable than French Quarter Fest. About the only celebration that trumps this is a little thing called Mardi Gras. Most if not all Festivals are outdoors and as such, is completely dependent on the weather. Typically, French Quarter Fest is the very definition of what the French Quarter, New Orleans, and Louisiana is all about, but for 2015, the rain definitely put a slight damper on any singing in the rain.

French Quarter Fest is on its 32nd year of celebration from April 9-12. Produced by the non-profit French Quarter Festivals, it’s one of three Festivals produced by the group which also includes Satchmo SummerFest and Christmas New Orleans Style. The Mission of the organization is to promote and continue awareness of the French Quarter and New Orleans. Prior to French Quarter Fest, the largest single festival event in New Orleans was the World’s Fair in 1984. Spanning across Woldenberg Riverfront Park to Jackson Square and all the way to the Louisiana State Museum’s Old U.S. Mint in the French Market, it’s truly a spectacle. Over 2,000 volunteers, 50 plus local restaurants, 1,500 local musicians, 23 music stages, and more than 500,000 people from all around the world come to enjoy the experience. Economically, the impact of French Quarter Fest cannot be understated as it brings more than 250 million dollars of direct economic impact to New Orleans and its presence also affects Louisiana as it’s becoming an Internationally renowned event. And although it seems to get more and more commercialized over its 32 year span, I feel it’s the best representation for what New Orleans and Louisiana has available for those who’ve never experienced what this region offers.

Let’s begin with music, with more than 23 stages and thousands of artists in all genres from Jazz, Zydeco, Brass Bands, Folk, Latin, Gospel, Funk, Classical, Cabaret, R&B, and Funk just to name a few, there’s something for everyone. Big Name NOLA greats such as Allen Toussaint, Rebirth Brass Band, and Irvin Mayfield along with countless Louisiana musical artists, there really is no better way to experience the breadth of music that this region offers other than French Quarter Fest. Food…ahhh Food, my favorite topic, is here in force with a focus on local restaurants and vendors offering visitors a taste of Cajun, Creole, and Southern dishes while enjoying the festivities. Finally, it’s the cultural experience that French Quarter Fest provides making it special in so many ways. Unlike Mardi Gras, which is typically a tourist-focused spectacle in New Orleans, French Quarter Fest is attended by almost 50% of locals and 50% visitors. What this means is that you get a wonderful blend of all cultures from all over Louisiana and the World giving you exposure to more than just New Orleans. In short, French Quarter Fest is Fun!

Unfortunately, in 2015 the rain really did change the mood of French Quarter Fest. Friday started off with all the revelry and joy that you’d come to expect, but once the rain rolled in Saturday and Sunday, the atmosphere changed just like our weather. Rain means less people and music bands bravely weathered the storm to entertain attendees. Typically a sea of people would litter the streets of the French Quarter flowing from one festive destination to the next all the while dancing to the soulful rhythm of New Orleans. And although the rain did affect what would otherwise have been an awesome Festival, it still didn’t change the feeling of Singing in the Rain.