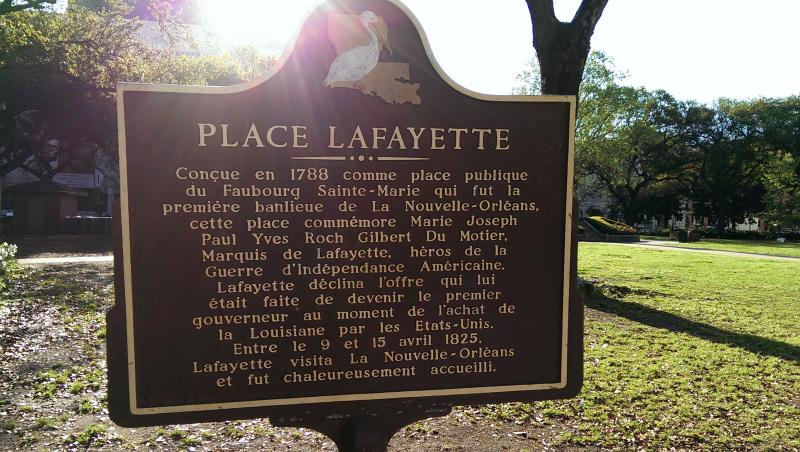 In the middle of the New Orleans Concrete Jungle, lies a Square that is both Peaceful and Musical. It’s not uncommon for many major Metropolitan cities to have a little bit of Nature giving life to the sometimes cold and artificial atmosphere of many downtown cityscapes. But amidst the towering structures in the CBD (Central Business District), we have Lafayette Square or simply the Square. With just 2.5 acres of greenery, statues, and park benches, there’s not really much to see, but its value to the CBD is enormous. Designed in 1788 by Charles Laveau Trudeau who also later became mayor of New Orleans in 1812, the park is named after the famous French General Gilbert du Motier, marquis de La Fayette who fought in the American Revolutionary War and the French Revolution.

Besides Lafayette, other statues of prominent historical figures are also present including Henry Clay, John McDonogh, and Benjamin Franklin. It’s located right across from Gallier Hall, the previous city hall of New Orleans, and is between the famous Green Streetcar St. Charles St. and Camp St. Besides the historical homages, Lafayette Square has its own unique presence in the form of Music. After Hurricane Katrina in 2005, the park was heavily damaged and was considered unsafe. It wasn’t until the Lafayette Square Conservancy stepped in to redevelop and reshape the Square into something special. Through the Young  Leadership Council, Lafayette Square transformed into the center of downtown festivities with their 12-week Music event Wednesday at the Square. Music lovers, foodies, and overworked professionals, can come and enjoy live music, food, and artwork from local artisans and musicians all within walking distances from their cubicles. It’s not only a refreshing change, but it’s also infused with New Orleans’ music and art which makes Lafayette Square Surprisingly Special. Get Location