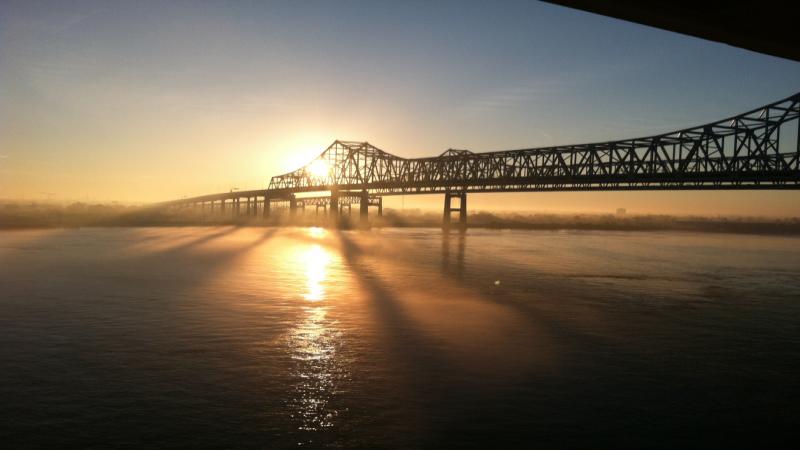 Wait, wait it’s not the “Moonwalk” that you’re thinking of but you might still feel like dancing. The Mississippi River is known for many things: steamboats, ships, barges…Mark Twain, but one thing it’s not known for is Beauty. Walking on the New Orleans “Moon Walk” Riverfront might change all that.

Ok… So it’s not named after a Pop Icon

When I first heard the name Moonwalk I was thinking of the King of Pop however the origin of the name has its own claim to fame. For most tourists and even locals, we just refer to it as the Riverfront. It’s fitting as it’s right next to the Majestic Mississippi River.

Before the Moon Walk, the Riverfront wasn’t a place you can walk on…unless you were a ship. In the early 19th century, a catastrophic flood rush through Louisiana due to a Mississippi River levee failure. The original levee system was built during the 18th century and at the time, they were only 3 feet tall! These levees were later raised several times to help prevent future disasters. Better protection didn’t mean better views as the only scenic beauty people could enjoy was…a gray concrete levee! The River was still only accessible to ships and alligators…well that bit isn’t true, but it sounds more exciting!

Wharves, warehouses, shipyards populated the Riverfront for most of the 20th century and it wasn’t until 1976 that the “Moon Walk” was born. Revitalizing New Orleans was one of the then Mayor Maurice “Moon” Landrieu’s mission and later also his son’s, current Mayor Mitch Landrieu. As part of his rehabilitation efforts, the Riverfront was converted into a promenade and was given the name “Moon Walk” after his own nickname “Moon.” So now we have a way to enjoy the Mighty Mississippi River in all its glory and by the late 1980’s, Woldenberg Park was constructed and donated by local philanthropist Malcolm Woldenberg and finally, the addition of the famous Red Streetcars were built running from the French Market to Canal Street.

For being only a mile long, the Riverfront seems so much more expansive and enjoyable. The walk starts at the French Market where you’ll see the Governor Nichols Wharf and the occasional tribe of gutter punks. Sunrise in the French Quarter is seldom more beautiful than it is here. It’s no wonder that the Riverfront is a loving spot for locals to soak up some sun while burning a few calories. You can feel the cool, soft breeze touching your skin as you hear a melodic symphony of horns from cargo ships along with jazzy sounds of saxophones from musicians on the river. As you stroll further down, you’ll pass the Washington Artillery Park at Jackson Square, the Natchez and Creole Queen Steamboats, Woldenberg Park, and finally, the Audubon Aquarium and Riverwalk Outlet Mall.

Woldenberg Park is probably the most memorable area as it’s littered with gorgeous monuments and structures that would belong at any exhibit. Most striking is the Monument to the Immigrant crafted by sculptor Franco Allesandrini which is a stark reminder of New Orleans’ immigrant heritage. Last but not least, is the Mississippi River itself which can be described in one word…“Harmonious.” It’s odd to think that amid the chaos of cargo ships, tug boats, barges, steamboats and mega cruise ships, we find a tranquil relationship between steel and river.

Although you won’t be as famous on this “Moon Walk”, at least you can feel as good as a pop icon gliding through the Riverfront. Get Location

Let Me Introduce Myself…