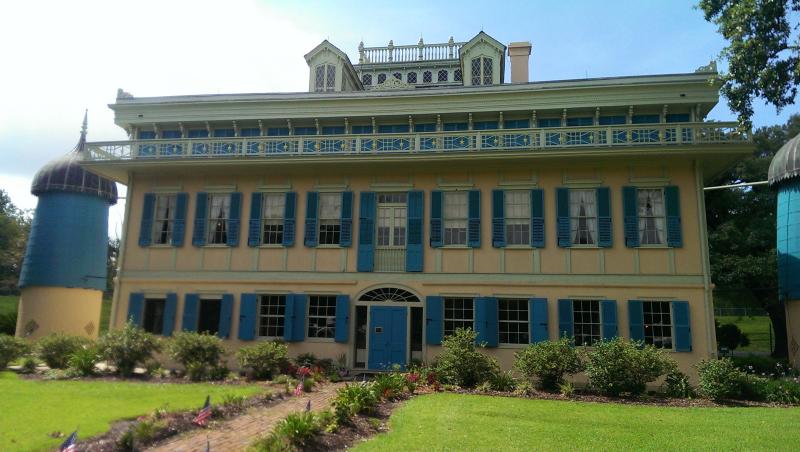 Anyone visiting New Orleans or Louisiana might have heard of the Majestic Plantations on the Mississippi River Road. Historic plantations are littered throughout New Orleans, Louisiana, and the South in general. At one point, the wealthiest people in the United States lived along the River Road. However one colorful plantation stood out among the other white pillars.

San Francisco Plantation seems like the most unlikely choice for an estate in southern Louisiana, but just like its namesake, its history is just as colorful. In 1827, Elisee Rillieux, a free man of color and an astute investor, saw an opportunity in developing a sugar plantation in St. John the Baptist Parish. Elisee was a saavy investor and never intended to be a planter and within just three short years, sold it to Edmond Marmillion for a phenomenal sum of $100,000 taking a profit of $50,000.

An Estate of Misfortunes

Edmond’s ownership for the next twenty years would consist of hardship and bad luck. Debt would be present from the beginning and it wasn’t until the boom of the 1850’s until the plantation became profitable. Many unfortunate events occurred between then including the death of his wife Antoinette in 1843 from tuberculosis and subsequently six of his eight children also passed from the same disease.

Edmond spent an enormous amount of money and time into creating a grand plantation of beauty. In 1856 only a year after completing the construction, Edmond suddenly died from the same crippling condition as his wife and children before him. Valsin, the oldest son, returned from Europe with his new German bride Louise Von Seybold to surprise his father, but instead, was surprised by his father’s death and new role as plantation owner. Charles was the younger of the two remaining sons, but being less than ten years old, he couldn’t take over the responsibilities of ownership. Valsin was none to happy with this role and never wanted to return, however he would live his remaining years with his wife, children, and brother until his death in 1871 due to tuberculosis followed by Charle’s own passing in 1875. Louise would later sell the plantation for $50,000 and return to Germany with her three daughters never to return. The plantation did change hands over the years and fell into a state of disrepair up until the current owners Marathon Oil.

Step onto the San Francisco plantation now and you’ll notice its uniqueness at first sight with its ornate colors of bright blue and red. The name “San Francisco” was actually derived from the French term sons fruscins which stands for “without a penny in my pocket” and it was a comment made by Valsin referring to his wife’s extravagant spending in home remodeling. Bright colors during that time period represented wealth and the red door meant that they owned their homes.

Although you can’t take pictures or videos inside the home, you can take a paid tour. For about forty minutes, the tour provides an in depth history of the plantation and the Marmillions. Historical pieces and authentically restored architecture grace the home throughout. Outside visitors can explore well-preserved slave quarters and a small school. From its intriguing origins to its distinct appearance, the San Francisco Plantation definitely lives up to the grand reputation of the historic River Road. Get Location.

Fringes of the French Quarter Part 2