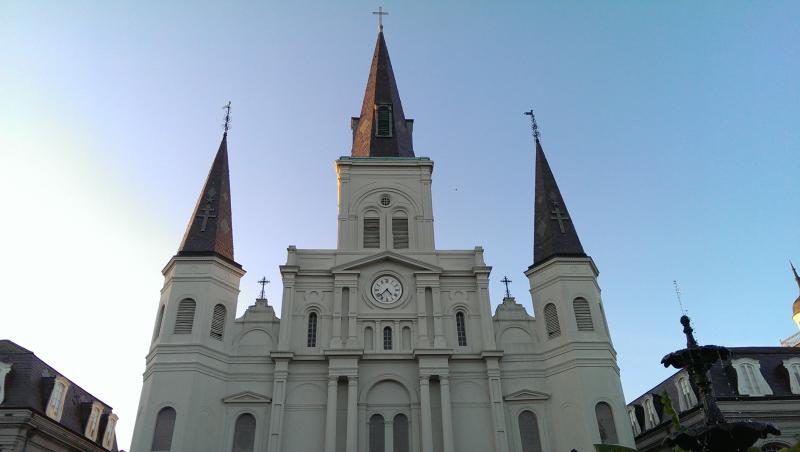 What image comes to mind when you think of New Orleans? It wasn’t until 1727 that St. Louis Church was completed and then subsequently burned down in the Great Fire of 1788 in the French Quarter. St. Louis Church was eventually rebuilt, this time by the ruling Spanish, and finally became St. Louis Cathedral in 1793. In 1794, a second great fire raged through the French Quarter but the cathedral remained unharmed this time. However, in 1909 there was actually a dynamite bombing in the cathedral and in 1915, the Hurricane of New Orleans brought more damage. It’s an understatement to say that St. Louis Cathedral has been through rough times which included a final recent hit during Hurricane Katrina in 2005 when high winds led to water damage to the Holtkamp (oldest organ maker in US) pipe organ.

Despite its destructive past, St. Louis Cathedral is an imposing structure from any angle. There is a majestic and often regal beauty that surrounds the structure that extends to its interior walls. If you’ve ever traveled to European nations such as Spain, France, or Italy, you’ll be spoiled by the architectural masterpieces. As you step inside St. Louis Cathedral, you’ll notice a small gift area before passing through to a stunning kaleidoscope of artwork and craftsmanship that will overwhelm you much in the same way the European architectures did. Crafted stained glass beams in a dizzying array of colors and as you look above, you’ll gaze upon the ivory ceiling embossed with Renaissance artistry. It truly is an awe-inspiring experience even to these eyeballs that have seen it a billion times over.

Also, several prominent priests and monks are actually buried on church grounds specifically behind the church where we have a statue of Jesus that’s a sight to behold at night. Rumors also speak of ghosts roaming the cathedral. St. Louis Cathedral, like New Orleans and the people who inhabit it, has a history of destruction, but despite this, it’s become an iconic symbol of Hope and Resilience. Get Location

City of the Dead, New Orleans