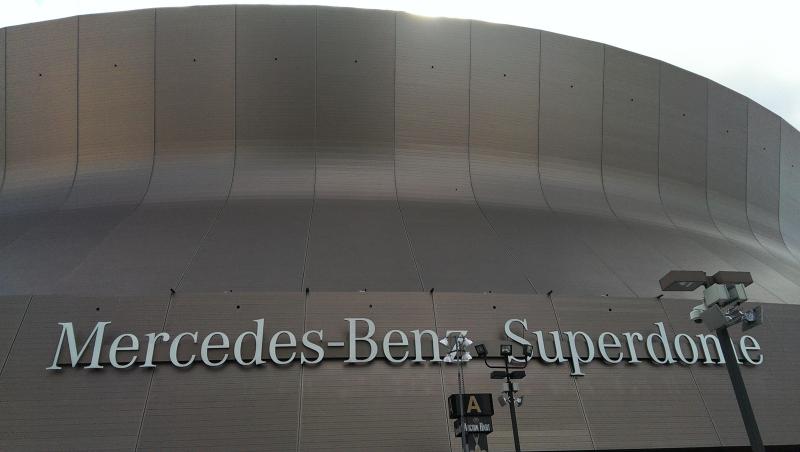 Rocky Road to the Dome

The story of the Superdome begins with early plans in 1967 when David Dixon, the founder of the United States Football League, saw an opportunity in New Orleans that wasn’t being fulfilled. Prior to the Superdome, exhibition football games were actually being played at Tulane Stadium and there wasn’t a NFL presence. The NFL however would not bring national league games to New Orleans without a domed stadium capable of hosting such events as Tulane Stadium was built more for college games at nearby Tulane University than professional events. Dixon’s vision for the Superdome came to light when he met with then governor of Louisiana John McKeithen and when they toured the famous Astrodome in Houston, Tx, the governor knew he wanted a dome stadium like this and Dixon was ready to create an international icon in New Orleans. By 1966, bonds approved for construction began and the goal was to have the Superdome ready by 1972 just in time for Super Bowl IX with an initial budget of $46 million dollars, but the dream would have to wait a little further. Delays, increased costs, political and possible financial corruption all added to an already late schedule especially with the oil crisis in 1973. The final costs ballooned to $165 million which was an enormous increase over the original projected costs. By 1975, the Superdome was ready for  prime time and the first Saints game was housed in the Dome hosting the Cincinnati Bengals and losing in a crushing defeat of 21-0. Tulane Stadium was also demolished on the same day of the Superdome’s grand opening.

For years, the Superdome was home to many memorable games and special events. For some time, it was actually the largest indoor dome in the world housing up to 76,000 people currently. In the years afterwards, the Superdome became synonymous with the Saints and with the owner of the Saints Tom Benson. Tom Benson, a New Orleans native and billionaire, gained his fortunes through various car dealerships especially Chevrolet and Mercedes Benz. In fact the Superdome, originally the Louisiana Superdome, would eventually be renamed the Mercedes Benz Superdome primarily due to Benson’s direction. Everything it would seem was “Super” until August 29, 2005 when Katrina hit New Orleans resulting in the most catastrophic natural and man-made disaster ever witnessed in the United States. Suddenly, people were scrambling in panic and disbelief and the Superdome was no longer a center for celebration…it was an infamous Dome of Horror. Over 14,000 people inhabited the sporting arena as it became a makeshift shelter. Shocking stories of violence, rape, death, and neglect all abound along with striking images of people surrounding the dome screaming for help and attention to the inhumanity that was transpiring in the Dome. Amidst the suffering and controversy in the Superdome, it did serve as a place for people to escape the ravages of the storm and flooded city of broken levees which if wasn’t available, would have probably resulted in thousands of more deaths. This was New Orleans’ darkest time which overshadowed any memories of festivities that the city and Dome had to offer, but there would be a revival that no one saw coming.

Rebirth of the Superdome and New Orleans

Katrina will forever go down in US history as a destructive and even shameful event that should have never happened, but out of it, we have an inspiring story of recovery. After Katrina and the city cleanup, more than $500 million was put into restoring and renovating the Superdome. But it was one momentous occassion that pushed the Dome and New Orleans into a new era of glory. That moment occurred in the Superdome on February 7, 2010 when the New Orleans Saints defeated the Indiana Colts with a 31-17 victory in the biggest game of the sporting world…Super Bowl XLIV. You can hear the chants of “Who Dat? Who Dat? Who Dat Sey Dey Gonna Beat Dem Saints!” and it was from this momentous triumph that the city and people of New Orleans would open a new chapter of “Rebirth!” The Super Bowl win would bring International attention to the city and people in a way that has never happened since Katrina. This attention was sorely needed and it reminded the World that New Orleans and the Superdome were back. Who Dat! Get Location